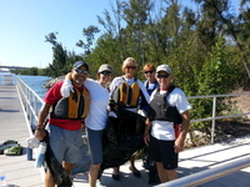 Blazing Paddles is very active in community service and outreach. Here are some of the activities we are involved with, and we are available to do so for other charities:

Fort Lauderdale Children’s Theatre
​The Fort Lauderdale Children’s Theatre is a 501(c)(3), established in 1952. It provides cultural and educational opportunities for children, ages 3 ½ through 18. Through year-round classes, camps, productions and outreach programs, FLCT gives children of all abilities the chance to develop creativity, problem solving skills and self-esteem. FLCT is the oldest documented children’s theatre in the state of Florida and one of the few theatres in the nation whose performances use students as actors, assistant directors, backstage crew and technicians. FLCT’s programs touch more than 25,000 children and adults every year. All young people, regardless of economic, cultural or ethnic background, are invited to participate, thanks to the generous support of local individuals, corporations, foundations and Blazing Paddles, which provides volunteer services for FLCT fundraisers, such as the Synergy Series dragon boat racing series and the West Lake Challenge Adventure Race.

Deliver the Dream
​Deliver the Dream helps families suffering from a serious illness or crisis. DTD invites up to 15 families, free of charge, to one of their retreat locations. Each family that attends has a member – whether it’s a child or parent – living with an illness such as Cancer, Autism, HIV/AIDS or Cerebral Palsy. Our retreats allow families to relax, enjoy time together, forge new friendships and create support groups with other families suffering from the same disease. When one person in a family is sick, the entire family is impacted and there are very few organizations nationwide that focus on the whole family unit like Deliver the Dream. Blazing Paddles has provided the volunteers needed to provide dragon boat outings which DTD auctions to raise funds to support their worthy cause.

Big Brothers/Big Sisters
Big Brothers Big Sisters is the oldest and largest youth mentoring organization in the United States. For more than a century, BB/BS has been developing positive relationships that have a direct and lasting impact on the lives of young people. Big Brothers Big Sisters serves children ages 5 through 18, helping them reach their potential through professionally supported, one-to-one relationships with measurable impact.
​
National research has shown that positive relationships between youth and their Big Brothers and Big Sisters have a direct and measurable impact on children’s lives. Little Brothers and Sisters are:
Blazing Paddles members provide volunteer services so that BB/BS pairs can enjoy dragon boat outings free of charge.

Waterway Cleanup
​In addition to participation in large clean up efforts, Blazing Paddles removes trash from the waterways it uses on virtually every outing. The team paddles three times per week, year-round, and estimates that it removes over 300 pounds of trash per year.